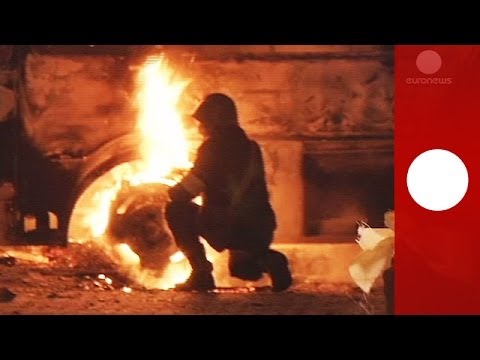 Hundreds of protesters on Sunday clashed with riot police in the center of the
Ukrainian capital, after the passage of harsh anti-protest legislation last week
seen as part of attempts to quash anti-government demonstrations.
A group of radical activists began attacking riot police with sticks, trying to push
their way toward the Ukrainian parliament building, which has been cordoned off
by rows of police and buses.
The protesters, many wearing hard hats and gas masks, used stun grenades and
fire extinguishers and threw flares as they attacked police in riot gear. Numerous explosions were heard and plumes of smoke rose above the crowd. Activists
chanted “Shame!” and “Revolution.” Some were injured and medics were seen
treating them.

euronews: the most watched news channel in Europe
Subscribe!

euronews is available in 14 languages: