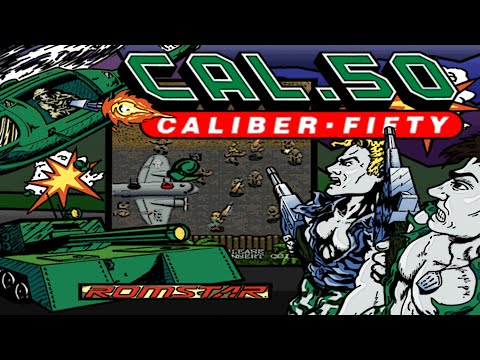 Caliber .50 is a 1989 scrolling shooter arcade game developed by SETA Corporation. A port of the game was released for the Sega Genesis in 1991.

Players control a United States Air Force pilot who was taken as a prisoner of war in Vietnam in 1972. The pilot must escape the prison compound by battling enemy soldiers with guns and grenades. Various power-ups are available that give the player use of various other weapons including a machine gun and flamethrower. Enemy vehicles such as a plane can also be commandeered.

The Mega Drive/Genesis version is single-player only, as the player now controls Captain Addis of the United States Army, who must rescue his fellow soldiers twenty years after he failed to retrieve his men during the Vietnam War. He must now re-navigate through the Ho Chi Minh trail in order to liberate his captured comrades-in-arms. Surviving soldiers are displayed by the dog tags that appear on the screen at the end of each level. An option menu allows players to choose from either an easy, normal, or hard difficulty level in addition to the number of initial lives.

Caliber .50 is a very short run&gun shooter, it takes roughly ~15 minutes to finish this game. The story is quite confusing, our hero got shot down in Vietnam in 1972 and 20 years later US Gov wants to rescue him, but of course the rescue mission is a total failure and our hero needs to escape by his own. Like other games from these times, there were two joysticks to control, so if you use MAME – you need both keyboard and mouse to play.