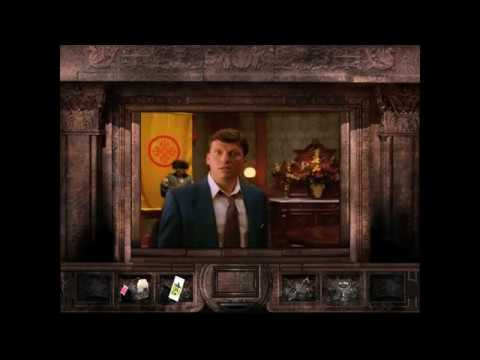 At about 40 minutes in, there’s a really long sequence of jigsaw puzzles. If you want to skip them, click this timestamp: 1:01:27

Temüjin is a full-motion video (FMV) adventure game developed by Southpeak Interactive using their Video Reality engine. What makes the Video Reality engine unique is that it enables developers to create explorable FMV environments where movement is controlled by the player. While this system still has many limitations, it allows for some of the most interactive FMV gameplay around. Despite this, though, Temüjin’s movement still feels clunky at times, and it can be frustrating to try to get from one point to another if you don’t know exactly how the system works. The puzzles can also be quite vague, making it extremely difficult to complete without a hint guide (Episode 3 is particularly infamous).

However, what Temüjin lacks in gameplay it makes up for in story. Temüjin has an extremely interesting supernatural mystery plot. While the first episode is admittedly slow-paced, the story ramps up heavily in the later episodes with plot twists and revelations. The acting is campy, as you’d expect in an FMV game, but that only adds to the charm (in my opinion anyways).

I’ve also uploaded a recording of the Temüjin “Tour Disc”. This demo disc contains two unique demo-exclusive puzzles and some interesting behind-the-scenes footage, as well as the game’s official trailer. You can see that recording here:

*Here are some more details regarding the easter egg. The clue was originally hidden on the Southpeak Interactive website in the form of a poem called Overature Obscuro. Here are the lyrics of the poem:

Begin anew, seek naught but fun
Where art is new, break only one
The lights turn out, where Wah-Jin waits
And click the glow above the vase
Then to his tomb, where time you take
But nothing more, lest he wake
Now once again, let steel to fly
Another shattered dream goes by
A vessel find of deadly mist
Thus complete your shopping list
Behind locked doors awaits your goal
Where music will restore your soul
Once inside, close the door
Then spray his ear and hear the score

Here is the interpretation of the poem:
Start a new game from disc 1.
Go to the New Artist Gallery and fling one ball from the impossible machine.
Go to the Capricorn Room and stand forward one step in front of the door. Pan right and turn off the light. Then pan left in the dark. This part is tricky; you need to wait for a light to flash above the vase. On Windows 10, the framerate divebombs on this screen and the vase only flashes once every 20 seconds or so, so it can be hard to get right.
Once you’ve done that, go to the coffin and take Mr. Stevenson’s pocketwatch.
Now go back to the New Artist Gallery and use the impossible machine again to fling another ball.
Go to the Supply Room (back area of the Break Room) and grab the bug spray.
Open up the Restoration Studio by going into Stevenson’s office and hitting the page button on the phone.
Now enter the Restoration Studio and go to Susanne’s desk. Pan up to the tape deck.
Close the door on the tape deck.
Finally, use the bug spray on the statue’s ear to hear a depressing song about the development of the game.

**Regarding Episode 6, there are a number of paths you can take through the comic book. However, there is no “correct path”. Every path leads to the same ending, but I decided to include all of the different variations you can get anyways.