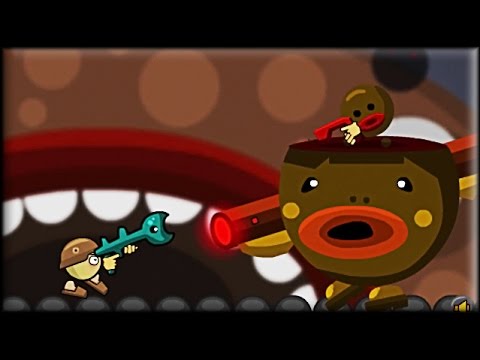 Different monsters from different locations have been running rampant. Time to clean up these monsters with your character in this fun shooting game called Spurt! The mission here is to control your character on each level and start shooting all the monsters that will appear. Jump on the platforms to reach new areas and to avoid their projectiles. Make sure you prevent your character from receiving too much damage or else you will get knocked out. Defeat bosses at the end of each level and collect lots of coins. Visit the shop and purchase new guns and defense items for your character.

The dictionary states that the word Spurt means a sudden gush. It could be any kind of gush but this game called Spurt has a sudden rush and excitement to it. You’re a circular guy walking around the fields of danger. You have your guns and your armor as you take out the hordes of undead and evil monsters standing in your way.

The game’s visuals are hand drawn and they look simplistic. By no means are they bad but they’re just plain to look at and that’s not really a bad thing. Despite the simplistic nature of the art, the animations are fluent and good. You get to appreciate the little details like the eye and mouth movements of the enemy. The enemies themselves come at a variety which doesn’t make the game seem boring and redundant. The music itself is another good addition to the game. The game is like a dystopian type setting where the undead just rains on you but the music comes in a good variety. You get to hear some funky yet appropriate music which then shifts to a more interesting and creepier with sometimes action packed music which is best suited for the game.

The game is a 2D shooter where you control your character with the WASD keys for maneuvering in the battlefield. You can shoot at all direction much like an entire circle. You also need to press the fire button while aiming with the use of the mouse to hit your targets. There are also the other aspects like jumping and ducking. The objective in each level is to annihilate all enemies of each level. In some levels there are no smaller enemies but a giant boss fight. There are 15 levels that you need to conquer with your guns and your wit. Whenever you kill a monster, they will drop coins and you can use those coins to purchase new weapons, armor or upgrade your current ones as well as passive abilities. Once you conquer every five levels, there is a bonus level that opens up where you can do wave rounds. You can earn a lot of coins in these levels and they wouldn’t affect your overall progress. Completing each level also awards you a medal rank with 1 being the lowest and 3 being the highest. If you’re an aggressive player then make sure you get all 3 ranked medals as you can do the levels over and over again. The game can be considered easy as well as hard at the same time. It’s easy in a sense because you rarely die especially if you upgrade your armor and weapons. The downside is that most bosses also takes a million hits before they die but they are very easy and don’t prove much of a challenge. You should also watch out for you cursor and make sure it doesn’t go off screen because the game won’t pause when that happens and the game goes idle.