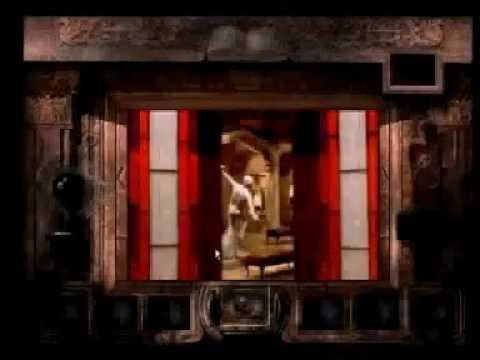 At the beginning of the 13th century, the Mongolian Empire was united by Genghis Khan, whose real name was Temüjin. At his death, he was buried with some mystical artifacts, one of which supposedly contained a dark and evil power. Time has passed and the tomb has remained undisturbed, until archaeologists recover the artifacts and put them on display at the Stevenson Museum. Slowly the powers of the artifacts begin to reawaken…

Temüjin is a first-person adventure game, notable for its use of live-action full motion video and 360-degrees movement. The player begins in the lobby of the Stevenson Museum without any clue as to how they got there or their identity. Worse, the player is unable to speak, even though different people wander through the exhibit halls. The player travel through the halls, controlled in 360-degrees movement. The player will encounter items, which can be picked up and manipulated as well as different people who can be interacted with in various fashions. Various puzzles relating to the Mongols and the exhibits must be solved, over seven episodes, in order to complete the game.

This video shows the trailers , making of and a little sample of the game demo.